Deputy Prime Minister Ayman Safadi said on Sunday that former Crown Prince Hamzah bin Hussein and his aides were in contact with “foreign parties” about the “right timing to destabilize” Jordanian security.

Security forces arrested several officials on Saturday. Hamzah said he was placed under house arrest as he criticized the government.

Safadi said Hamzah had engaged in “recent activities and movements” that aimed to incite people against the state.

King Abdullah II will discuss the situation with Hamzah, his half-brother, directly and within the royal family, Safadi said in a press conference.

The deputy prime minister said ongoing investigations began a long time ago, and that the Jordanian government has foiled all moves to undermine security. He did not identify the “foreign parties” allegedly involved in the plot.

What was the reaction in Jordan?

Queen Noor, the mother of former Crown Prince Hamzah, denounced on Sunday a “wicked slander” in her first response to the revelations after circulated footage showed her son criticizing the government.

“Praying that truth and justice will prevail for all the innocent victims of this wicked slander. God bless and keep them safe,” she said on Twitter.

Jordan’s army chief said on Saturday that Hamzah was not under arrest, but had been asked to stop “some activities that could be used to shake the stability and security of Jordan.” But the prince has disputed this in a video message.

His comment came during a meeting of top officials as they mark the 100th anniversary of the Jordanian state.

The official Al-Rai newspaper warned on Sunday that Jordan’s “security and stability” were a “red line that must not be crossed or even approached.”

Among those detained was Bassem Awadallah, a former finance and planning minister and a longtime confidant of the king. He was also an adviser to Saudi Crown Prince Mohammed bin Salman.

Awadallah, a proponent of economic reforms, resigned as chief of the royal court in 2008 amid allegations of interference in sensitive political and economic issues.

Safadi said Awadallah was in contact with the so-called “foreign opposition,” which aimed to incite the people against the Jordanian state.

He was the king’s envoy to Saudi Arabia, where he also had investments, according to local media reports.

Hamzah said he was not allowed to leave his home or meet with other people, according to a video provided by his lawyer to the BBC.

“I recorded this video to make it clear that what has been said officially is not a reflection of what is actually happening on the ground,” he said in a video statement. 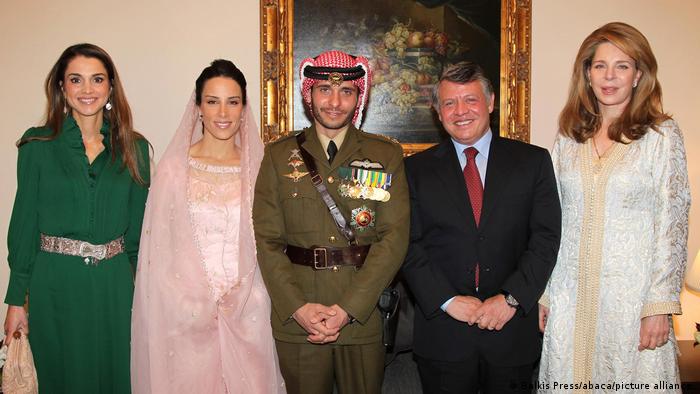 Hamzah slammed the Jordanian government over what he said was a responsibility for the country’s deteriorating human rights situation. He also said he would not abide by orders limiting his contact with the public.

“Of course I’m not going to obey when they say you can’t go out, you can’t tweet, you can’t communicate with people,” he said in an audio recording posted on Twitter late Sunday.

Labib Kamhawi, a Jordanian analyst, told the Associated Press that Hamzah likely crossed a line for the royal family by indicating he might be an alternative to the long-ruling king.

“This is something the king does not accept or tolerate,” he told the AP. “This is why we are now witnessing what has happened. This file is now more or less closed.”

Which countries backed the king?

Neighboring countries and allies of Jordan expressed their support for King Abdullah on Sunday.

The United States, the United Kingdom and Gulf allies rallied behind the king, highlighting Jordan’s strategic importance in the region.

What is the situation in Jordan?

Although the developments in Jordan have come as a surprise for many, DW reporter Aya Ibrahim says there were indications a closer look at the developments on the ground show what led to this point.

“The country has really suffered under the COVID-19 pandemic economically. It has also had to undergo some very serious austerity measures that are starting to be really painful for ordinary Jordanians,” she told DW News.

DW reporter Aya Ibrahim on the situation in Jordan, where the king’s half-brother claims to be under house arrest.

Ibrahim noted that former Prince Hamzah’s criticism of corruption and the country’s ruling elite “does resonate with some of the king’s critics domestically.”

“He did say that he met with some of the tribal leaders, so one can then understand why the official view that this was a destabilizing move on his part,” she said.

“Jordan is normally a stable Arab kingdom that has been a staunch ally of countries in Europe and the US, particularly when it comes to counterterrorism cooperation in the Middle East,” Sweis said.

“It is really a rare kind of tension that we have not really seen before at the forefront,” she added.

Amman-based political analyst and commentator Amer Al Sabaileh called on the Jordanian government to release evidence of the coup plot against the king.

“We [in Jordan] don’t feel there is anyone interested in this destabilization of Jordan,” he told DW. “So I think the government is obliged to reveal these concrete evidences in order to be credible and especially also for the internal audience and the Jordanian public opinion.”

Jordan has long been a key Western ally and an island of stability in a turbulent region. It borders Israel, the Palestinian territories, Syria and Iraq.